The Taipei Economic & Cultural Office in the Philippines, in cooperation with the Noordhoff Craniofacial Foundation (NCF) Philippines, Inc. NCF-Taiwan, and the Chang Gung Memorial Hospital, sponsored the week-long international cleft mission for indigent patients at the Our Lady of Peace Hospital, Barangay San Dionisio, Paranaque. The medical mission which started on April 15 includes check-up and screening of cleft patients for surgery, cleft surgery, dental and orthodontic treatment, and speech therapy. 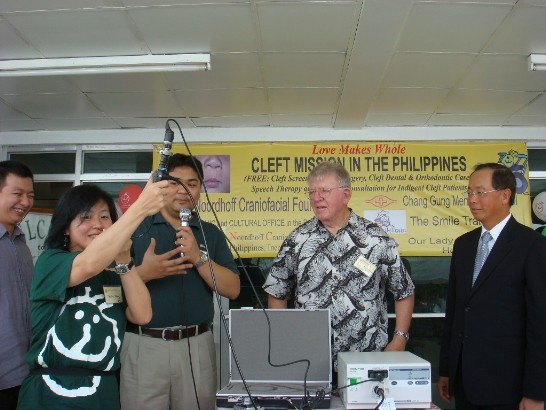 Dr. Samuel Noordhoff, founder of the Foundation, together with the medical team from NCF-Taiwan and Chang Gung Memorial hospital operated on twenty-two children with cleft lip and palate.

The medical mission culminated with Ambassador Donald C.T. Lee, representative of the Taipei Economic & Cultural Office in the Philippines, presenting to Dr. Bernard of NCFPI the Rhino-Laryngo Fiberscope donation of the government of the Republic of China (Taiwan) at a press conference held on April 24.

The rhino-laryngo fiberscope, costing about US$22,000, is the first of its kind in the Philippines. The medical instrument comes with a set of rhino laryngo fiberscope, video system, camera head and a video adapter. Rhino-Laryngo is similar to an endoscope that is used to make more effective speech therapy and craniofacial surgery.

NCF Philippines manages Our Lady of Peace Craniofacial Center in Our Lady of Peace Hospital where hundreds of cleft surgeries were done for free since 1993. The NCFPI also aims to contribute in educating the public on cleft condition and its social acceptance, aside from a multidisciplinary and continuing medical care. It also promotes researches aimed at improving the standards of cleft care and craniofacial treatment.

Parents with cleft lip and palate children are encouraged to visit the Our Lady of Peace Hospital Craniofacial Center for consultation and repair the deficiency. The services are offered for free.

Caption: Amb. Donald C.T. Lee, TECO representative, turned over the Rhino-laryngo fiberscope equipment donation of Taiwan to Dr. Bernard of NCFPI. (Standing from left) Amb. Lee, Dr. M. Samuel Noordhoff, and Dr. Bernard listen as a mission member shows and explains the functions of the rhino-laryngo accessories. The equipment is the first of its kind in the Philippines. The instrument is similar to an endoscope used to make more effective speech therapy and craniofacial surgery.

This article is original from the website of Tapei Economic and Cultural Office in the Philippines. http://www.taiwanembassy.org/PH/ct.asp?xItem=89874&ctNode=4695∓=272